Keep up to date with the latest COVID-19 information for Tasmania - www.coronavirus.tas.gov.au

The Tasmanian Freight Survey (the survey) is a regular survey of supply chains and the heavy vehicle freight movements across Tasmania, undertaken by the Department of State Growth. The results of the Survey are used to inform planning for Tasmania’s future freight transport system. The 2016-17 Survey is the sixth survey conducted to date. Previous surveys have been held every 3 years from 2002-03 to 2016-17.

Data collected in the survey is primarily gathered through interviews and reported data from businesses across a range of industries in Tasmania, including  agriculture, construction inputs, consumer goods, forestry, and mining. Since 2002-03, the survey has collected consistent data on the operation of Tasmania’s freight system, including:

The Department of State Growth is currently collecting data on freight movements during 2021-22, to inform an updated Data Summary that will be released in 2023.

If you have any queries, please contact State Growth at:

What is the aim of the survey?

At a State wide level to provide reliable and robust data concerning Tasmania's supply chains and the heavy freight land transport task to support description, analysis and modelling of the land transport freight task for policy development and planning purposes.

What does the survey cover?

The survey collects information about commodities moved by heavy vehicles and rail for Tasmania's major companies, providing a summary of large freight movements across the major parts of Tasmania's land transport network.

The Survey includes information on:

The survey collects information on specific freight movements, including:

How is the information from the survey used?

Key results from the 2016-17 Freight Survey are as follows. 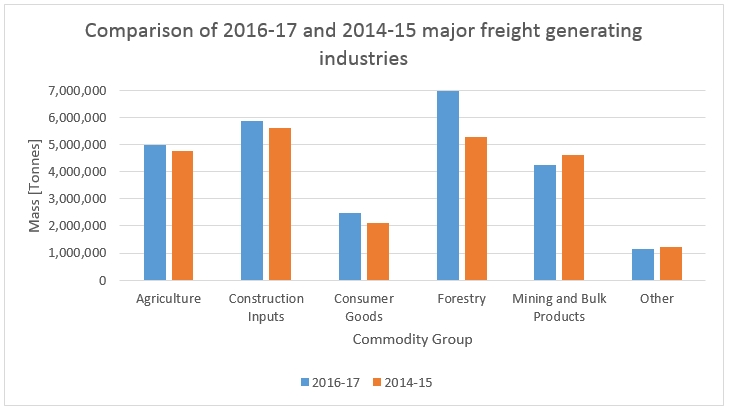