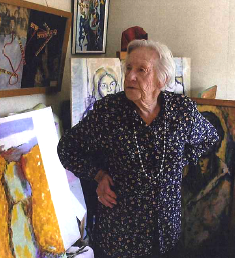 Vita Ethel Brown was born on 11 October 1916 in Mildura, Victoria. She was the only child of a Swedish mother and English father.

She went to school in Melbourne and excelled in sports becoming the Victorian State backstroke and diving champion. Vita's mother died when Vita was only 17 so independence came early. She went to secretarial school and worked at different jobs, including one as a wallpaper designer, an engagement that her family credit with igniting her artistic talent.

In 1934 Vita married Jeff Brown. Jeff, better known as 'Buster', was a commercial pilot aged 28 when they married. Eighteen months later with a newborn baby they moved to Tasmania and purchased a farm – 'Landridge' at Apsley. They spent 30 years on the farm before moving to Triabunna.

When her youngest daughter left school in 1971, Vita took the opportunity to pursue a Fine Arts Diploma at the School of Art in Hobart. She loved colour and movement and dared to paint in different mediums and styles. She studied in Sydney and London and along the way met many people who encouraged her. She travelled Europe visiting galleries and drawing inspiration wherever she went.

Upon returning home she involved herself teaching for Adult Education at Triabunna School, and with the local Regional Arts branch. In fact she was heavily involved in the regional arts scene, and in 2007 while attending a Regional Arts Australia conference in Alice Springs she was given a standing  ovation by the 800 delegates attending for she was the oldest working artist present.

Over 40 years Vita Brown's works been shown at a number of exhibitions and have been acquired by both private and institutional collectors.

Vita Brown passed away on 15 December 2012. In her will Vita provided a bequest so that emerging artists might have a bursary to assist with the initial purchase of materials needed to commence their professional arts practice.

Arts Tasmania is pleased to be able to offer the Vita Brown Bequest Bursary in line with the wishes of Vita Brown.

"Our mother was not like other mums. She was so different---independent, determined, and not afraid to speak her mind. She lived well before her time and lived life to the full. In later life it was out in the studio, in the garden or buzzing around in her little car getting involved in so many things.  Even  when  sadly she had to go to a nursing home she was asking for her car and planning her escape..." Lesley Anderson, Vita Brown's daughter.